We had two tours in 2018. The itineraries were most the same. Extras for the second tour included Bryce Canyon, Kodachrome Basin, and the Overlook Trail. Below are photos from the first tour. 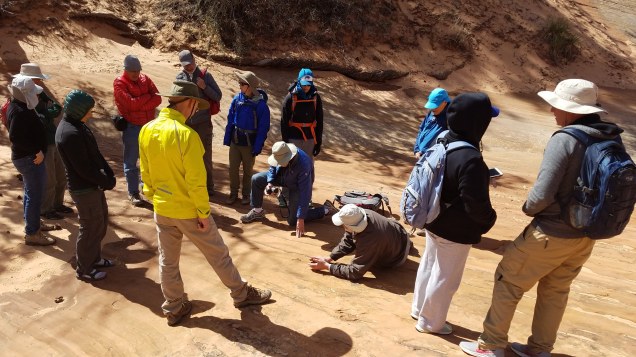 Moccasin Mountain Dinosaur Track Site. One of the highlights of the trip. There are hundreds, perhaps thousands, of dinosaur tracks here. Gerry Bryant, on his elbow in the center of the photo, is explaining the relationship of the tracks to the structure of the underlying sandstone layers. 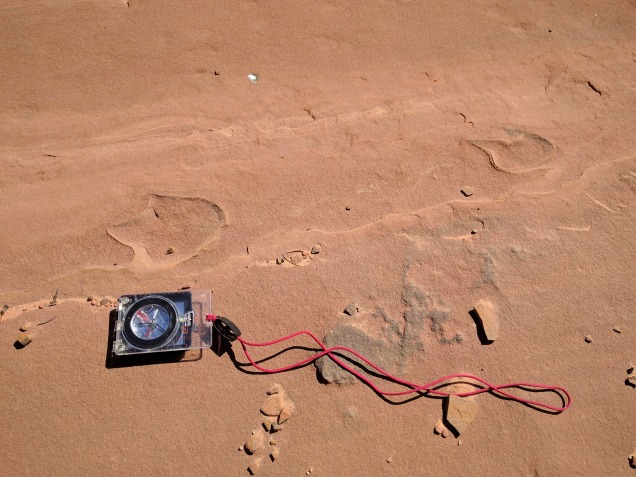 In the above photo, you can see two tracks. Track sizes at this location range from more than 12 inches long to less than two inches long. Quite a variety of animals. Every time I’ve gone, I’ve noticed some new feature that poses new questions or offers new insight. 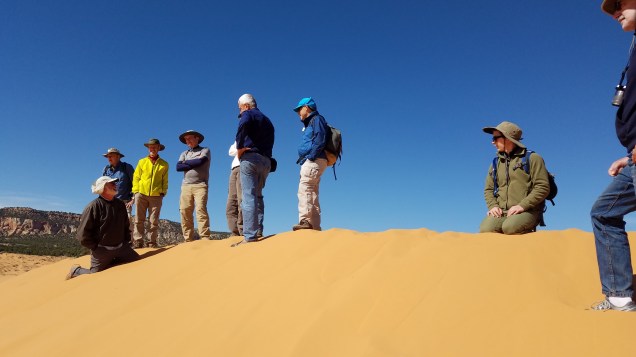 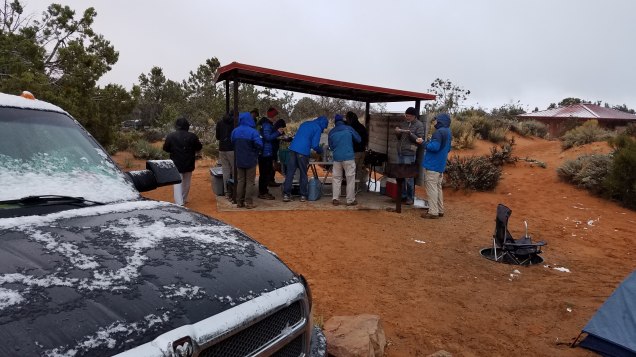 We went earlier this year than usual and the weather was colder than normal. We had snow on the vehicles when we woke up. We were glad for the shelter over the kitchen table. The food was good even if the weather wasn’t.

This was our welcome to Grand Canyon. Fortunately, an hour later the skies cleared and we had sun for the weekend. But all our cold weather clothes were justified. With me are Robert Johnston, the chef on our first tour, and his wife Kathy. I’m going to start charging extra for the tours that feature Robert’s cooking. He’s incredible!

This rock is central to the geological story of the Navajo Sandstone. It is not sandstone. It is a carbonate, a rock formed by evaporation in shallow ponds and lakes that occupied the hollows or troughs between dunes in the ancient environment. These ponds lasted long enough for large amounts of carbonate to precipitate. In places these carbonate deposits are more than two feet thick, indicating that the dunes were fairly stable for long periods of time. In the neighborhood of these ponds the dunes are littered with animal tracks and signs of vegetation, indicating that these ponds were, in fact, vital elements in the ancient living ecosystem. (In contrast, if Noah’s Flood had created this formation, we would expect to find a jumbled mess of dead things not this kind of coherent life assemblage.)

John Anholm (in the water) and Sheen Bergeron navigating a tricky part of Buckskin Gulch. Half our group braved the frigid water and shoe-sucking muck to travel about five miles into Buckskin Gulch. Last year, when conditions were warmer and dryer, the bravest in our group did a 21 mile through-hike of the Gulch. 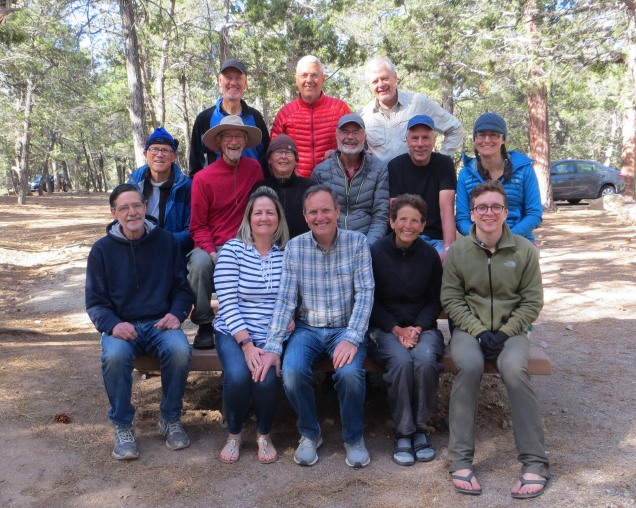 The first tour will emphasize hiking, featuring two hikes of 20+ miles. (With shorter options available.) The second tour will use the same campground itinerary, but the featured hiking will be shorter, five or six miles max with more time for campfire and conversation in the evenings. Cost for either tour is $600.  This covers everything, entrance fees, food, professional fee for our geologist, and local transportation. A reservation requires a deposit of $300. A check can be mailed to 43408 236th Ave SE, Enumclaw, WA  98022 or you can pay through Google Wallet. Up through the end of March, the deposit is fully refundable. Cancellation after the end of March, the refund will be $150.

Our adventure begins in St. George, UT, and ends in Las Vegas. For detailed itineraries click on the respective links to the right. The Feet and Miles Tour is the the first one featuring long hikes. The Sunshine and Campfire tour is the second tour which is less intense physically.