I wanted to write, “Rocks Telling Stories.” But these rocks ask more than they tell.

The above two pictures belong together, but they were not found together. The photo on the right is a boulder I found in a landslide or gravity slide along Kolob Canyon Road. The boulder is comprised of Shinarump–a conglomerate that is spread butter thin across thousands of square miles. It is recognized by its distinctive pebbles and prevalent petrified wood (top right of the rock I’m standing on). When I first saw this boulder in the landslide rubble, I was puzzled. The Shinarump formation occurs below the Navajo and Navajo debris comprised most of the flow. And when I looked at the canyon walls nearby, all I saw was Navajo Sandstone. So I had to be ABOVE the Shinarump. How could this boulder have landed here? I reconnoitered the area and finally found the bedrock (undisturbed or in situ) deposit pictured on the right. A close look identified petrified wood pieces in this conglomerate, confirming its Shinarump identity. This was up canyon from the slide. The strata in the entire area are dipping south, so as I went up canyon to the north I was actually going lower stratigraphically. Then I realized that the entire area for several miles had been involved in a gigantic slump or mass debris flow. The area of the slide was large enough that a boulder could have been ripped from this location and mixed with the Navajo Sandstone and left where I found it. A tiny mystery solved.

These two pictures are from Kolob Terrace. I was startled to see all these chert pebbles on top of the sandstone that comprises most of Zion Park’s cliffs. Then I was even more startled to see an arrowhead among the pebbles. Note the difference between the weathered surface of the pebble and the freshly-fractured surface of the arrowhead. (Fresh, as in hundreds of years old, maybe thousands. I once found a spear point on a mountain in southern California that was many hundreds of years, if not thousands, old. It looked like it had been chipped out yesterday.) The arrowhead and pebbles raise questions.

Who made the arrowhead? When? Out of what? Did the Indians use a chert pebble?

Then there’s the question: where did the pebbles come from? They form a carpet in some areas on top the Navajo Sandstone. How was the original chert formed? How was that chert eroded or weathered into chunks which could then be transported and rounded. And how did these pebbles end up strewn across hundreds of thousands of square miles?

The next two photos feature my favorite Colorado Plateau mystery. 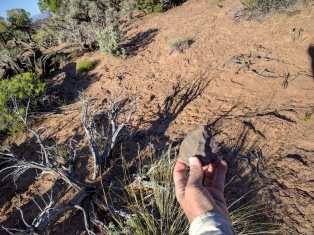 The photo on the left was taken in the Paria river a short distance above its confluence with Buckskin Gulch. Coming down Buckskin from Wire Grass Flat trailhead, the rock in Buckskin Canyon is one hundred percent sandstone or carbonate or mud. When you reach the junction with the Paria and head upstream, almost immediately, you notice a change in the rock in the riverbed. That is not surprising, the respective streams drain different territory. But what was surprising were the cobbles of banded quartzite. I knew of no source in the area for these rocks. Everything I knew about was either sedimentary–sandstone, shale, conglomerate, limestone–or volcanic. But the quartzite is metamorphic rock. As if finding these rocks in the Paria streambed wasn’t mystery enough, I found a single fragment of the same kind of rock at the top of Hog Canyon Butte north of Kanab. I have found a large pavement of this kind of rock on a prominence out toward Toroweap in Grand Canyon National Park. But there is no known provenance for these rocks. Quartzite (a metamorphic rock) is formed when sand/sandstone is buried kilometers underground (where there is sufficient heat and pressure). If it is going to be eroded, the formation must subsequently be lifted by tectonic activity and raised above sea level so water and gravity can do their work. Where was the original sand before it became stone? How was the original sand buried deep enough to transform into quartzite? If it was lifted, shouldn’t there be some piece of that uplift still standing somewhere? Why is all that is left of this massive activity, just these distinctive cobbles and pebbles?

We’ll ask that question on Talking Rocks 2018. Unless there has been some major scientific breakthrough, we won’t get a decent the answer.